Welcome to the tilde wiki!!!! The wiki for ~Camp!

This is where all the happy campers of https://tilde.camp can document different ideas, compile their collective research, and share information with each other, away from the noise and chaos of the mainstream internet.

This is a simple wiki, powered by PHP, and using the python script creoledump to translate the WikiCreole into HTML.

For more specifics on ~wiki bugs scroll down to Bugs.

To play around with WikiCreole syntax, and try to get a hang of it, feel free to play around in the sandbox where you can try out whatever you want! But first take a look at the basics in the image below.

(Once you got a hang of it, also check out the Additions our ~wiki has, listed toward the bottom of the page.)

The basic syntax for WikiCreole 1.0 is: 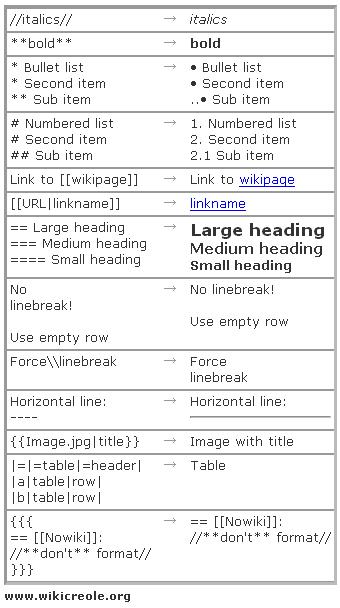 Every "Revision" is recorded on ~wiki. This means you can go back and see the evolution that an article has taken.

The History of a wiki is very important, because it's what enables the users to maintain the wiki despite it's openness. If the wiki is defaced, or the dark forces try to remove information that they don't want people to see, it will always remain in the history for any user to find and put back into the article.

To make it easier to copy things from old versions and put them back into the current version, or to copy information straight into your own notes, the WikiCreole is left intact, and not translated to HTML. This also allows you to easily compare one version to another line-by-line.

At the bottom of every wiki article you'll see a list of all the "Older versions".

The output of this can be confusing at first if you haven't used the "diff" command on Linux before. It's not as hard as it looks. Any line that is just indented by one space, without a "+" or a "-" before it, has stayed the same in both versions you are comparing. If there is a difference between the two versions, it will show you what lines have been added or removed using the "+" to indicate a line has been added, and the "-" to indicate the line has been removed.

It is common to see the same line twice, once with the "-" before it, immediately followed by the "+". That's because this line has been changed, and the "diff" program interprets that as having removed the old line, and added the new line, even though as a human you will understand that this is the same line except slightly altered. Another tricky thing about it is that it will consider everything in a paragraph as "one line" up until the user hit the Enter key to move to the next line. That means it will be easier to see the differences between versions when we separate paragraphs more often.

So, to recap, a paragraph that 8 lines long will still be interpreted as a single line up until the user hit Enter at the end of the paragraph. If the user only changed one thing, like added a comma, then all 8 lines will appear twice in the comparison. Once with a "-" and once with a "+" before it. Then you'll have to carefully read through all 8 lines, looking for the difference, which may be hard to spot if it's only a single character. Try letting your eyes rapidly jump up and down between the two paragraphs until you notice that the words don't exactly line up, and you'll be close to finding the difference. Of course, there's usually not much reason to try and spot such tiny differences, so you probably won't have to do all that.

This logs any changes made to the background programming of the ~wiki.

This is where all the known bugs are listed. Please add to the list if you find any.

This is stuff that is not exactly according to WikiCreole 1.0 specifications, although it's not technically a "bug".